In this painting I am dealing with several different types of texture.  As a hyper-realist, I am always striving to create an illusion that transcends mere representation and takes on a physical reality.  I want my audience to forget that their eyes are viewing a flat picture plane, and instead perceive the varied textures (the softness of flesh, the dryness of each leaf, etc.) as something tangible.

In my studies of art history, I’ve discovered a love for seventeenth century, Dutch trompe l’oeil painters.  Trompe l’oeil is a French term, meaning fool the eye.  What I find so amazing about this period of painting, is, especially in still life’s, the fact that every surface is represented with such conviction that it becomes the object.  There is a real understanding about the physicality of each thing (the stitching of cloth, the smoothness of metal, the effects of light on glass, etc.).  These varying surfaces also make for interesting compositions.  Unity with variety is the goal – having enough variation to distinguish each object as a separate thing, but also enough unity between them to hold the composition together.

One of the tricks of trompe l’oeil painting is the controlled build up of the paint to “model” the surface of the panel or canvas and create a relief effect. This is one way to fool the eye into believing in the reality of a three dimensional space.  The build up of paint literally pops out of the flat picture plane and assists in the illusion of depth, even in a shallow space.  Trompe l’oeil painting at it’s best will be able to convince the viewer that the “physical” build up of texture and the painted illusion of texture are one and the same.

Below, is a step by step display of how I built up the paint layers to create the texture, both physical and representational, of each leaf.  Of course, because the computer screen is flat, it fails to accurately represent the third dimension of the relief, but hopefully some resemblance will be evident.  In the areas where the leaf projects forward the most, I built the paint up opaquely just using white, and later glazed colors over it.  Each leaf has between 4 to 6 layers of glazes. 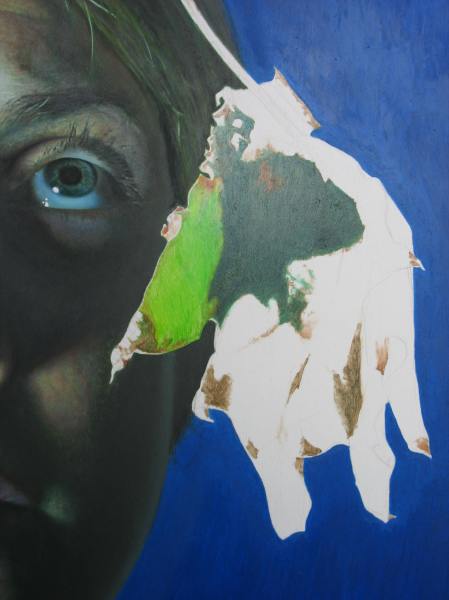 Thalo Green is brushed transparently over the warm shadow mass.  In the lighter section to the left, a combination of Thalo Green and Cadmium Yellow Light are brushed directly over the white ground, creating an extremely vibrant color which will be toned down with additional layers. 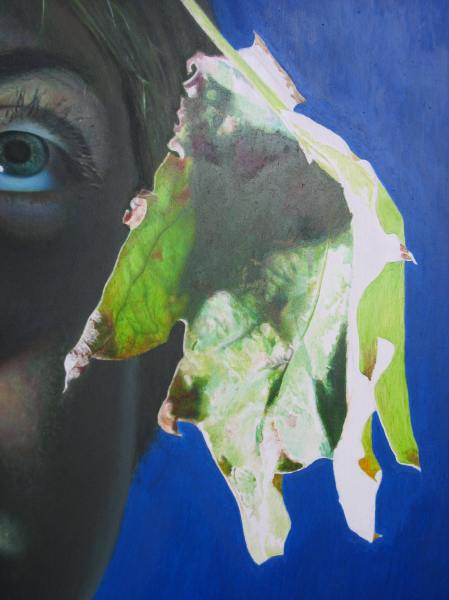 More variations of green are worked into the light mass as patches.  This approach is similar to a watercolor, in that I am working from light to dark, transparent to opaque.  Additional colors are added to the palette such as Yellow Ochre, Alizarin Orange, and Transparent Red Oxide, for some of the warmer variations.  The lightest lights won’t be touched until the final layer of glazing is applied. 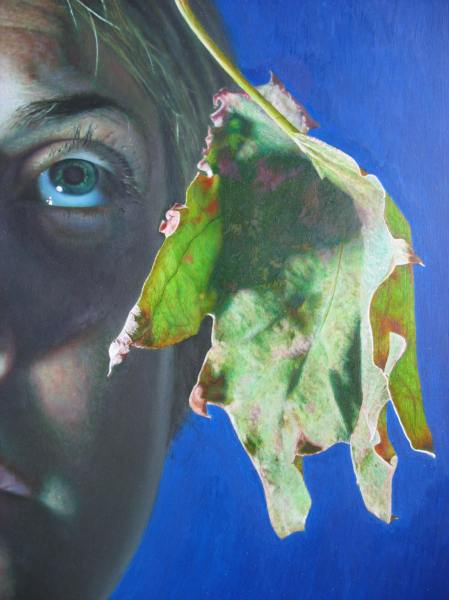 Here I have selectively added real texture with opaque paint in an effort to increase the illusion of three dimensional space.  I used Flake White as a heavy impasto (built up relief) first, and then, when dry, I added the colors on top as glazes.  Opaque white paint was used only where I wanted areas to project.  All other whites were the original oil primed ground untainted by additional layers.  However, final large body glazes were added to refine the tones eliminating most of the pure whites.

This entry was posted on Wednesday, January 6th, 2010 at 1:35 pm and is filed under Uncategorized. You can follow any responses to this entry through the RSS 2.0 feed. You can leave a response, or trackback from your own site.